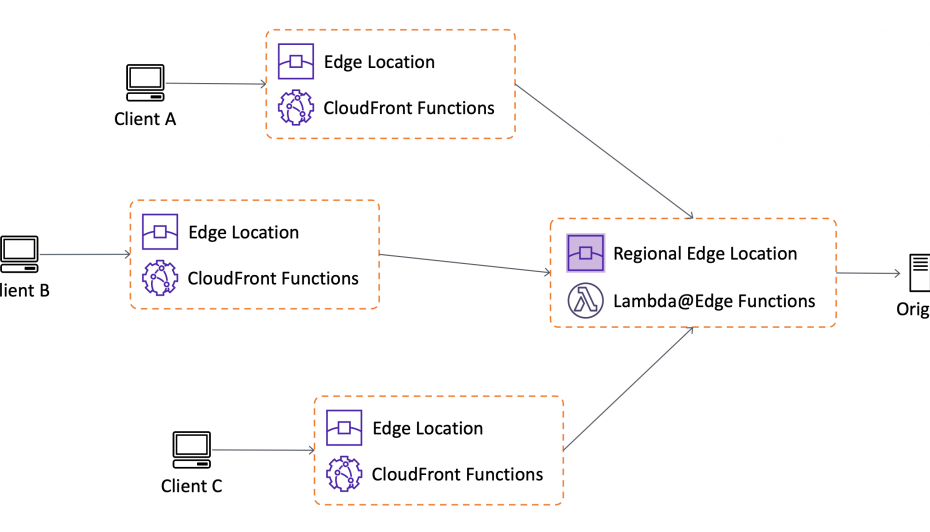 With Amazon CloudFront, you can securely deliver data, videos, applications, and APIs to your customers globally with low latency and high transfer speeds. To offer a customized experience and the lowest possible latency, many modern applications execute some form of logic at the edge. The use cases for applying logic at the edge can be grouped together in two main categories:

To help you with this second category of use cases, I am happy to announce the availability of CloudFront Functions, a new serverless scripting platform that allows you to run lightweight JavaScript code at the 218+ CloudFront edge locations at approximately 1/6th the price of Lambda@Edge. 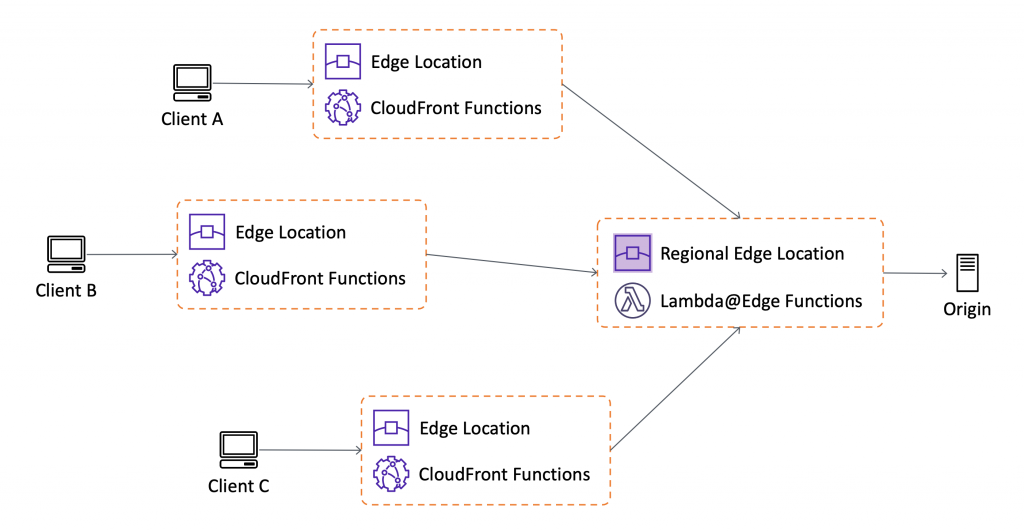 CloudFront Functions are ideal for lightweight processing of web requests, for example:

To give you the performance and scale that modern applications require, CloudFront Functions uses a new process-based isolation model instead of virtual machine (VM)-based isolation as used by AWS Lambda and Lambda@Edge. To do that, we had to enforce some restrictions, such as avoiding network and file system access. Also, functions run for less than one millisecond. In this way, they can handle millions of requests per second while giving you great performance on every function execution. Functions add almost no perceptible impact to overall content delivery network (CDN) performance.

If you need some of the capabilities of Lambda@Edge that are not available with CloudFront Functions, such as network access or a longer execution time, you can still use Lambda@Edge before and after content is cached by CloudFront.

To help you understand the difference between CloudFront Functions and Lambda@Edge, here’s a quick comparison:

Let’s see how this works in practice.

In the CloudFront console, I select Functions on the left bar and then Create function. I give the function a name and Continue.

From here, I can follow the lifecycle of my function with these steps:

1. In the Build tab, I can access two stages for each function: a Development stage for tests, and a Live stage that can be used by one or more CloudFront distributions. With the development stage selected, I type the code of my function and Save:

The function looks at the content of the CloudFront-Viewer-Country header set by CloudFront. If it contains one of the supported countries, and the URL does not already contain a country prefix, it adds the country at the beginning of the URL path. Otherwise, it lets the request pass through without changes.

2. In the Test tab, I select the event type (Viewer Request), the Stage (Development, for now) and a sample event.

Below, I can customize the Input event by selecting the HTTP method, and then editing the path of the URL, and optionally the client IP to use. I can also add custom headers, cookies, or query strings. In my case, I leave all the default values and add the CloudFront-Viewer-Country header with the value of FR (for France). Optionally, instead of using the visual editor, I can customize the input event by editing the JSON payload that is passed to the function. 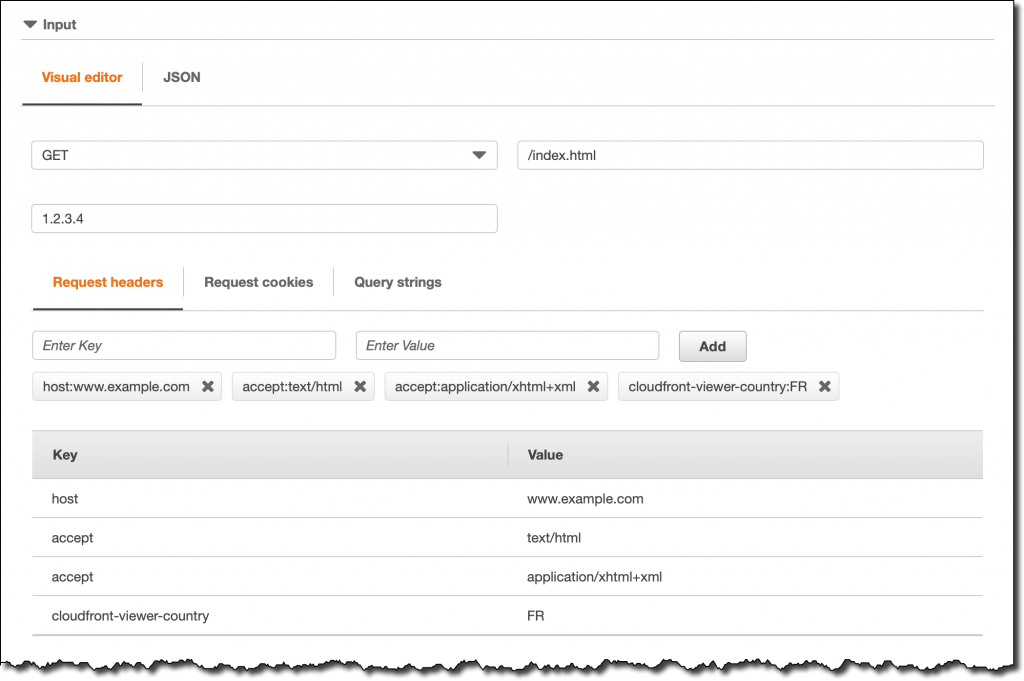 I click on the Test button and look at the Output. As expected, the request is being redirected (HTTP status code 302). In the Response headers, I see that the location where the request is being redirected starts with /fr/ to provide custom content for viewers based in France. If something doesn’t go as expected in my tests, I can look at the Function Logs. I can also use console.log() in my code to add more debugging information.

3. I run more tests using different configurations of URL and headers, then I move to the Publish tab to copy the function from the development stage to the live stage. Now, the function is ready to be associated with an existing distribution.

4. In the Associate tab, I select the Distribution, the Event type (Viewer Request or Viewer Response) and the Cache behavior (I only have the Default (*) cache behavior for my distribution). I click Add association and confirm in the dialog.

Now, I see the function association at the bottom of the Associate tab.

To test this configuration from two different locations, I start two Amazon Elastic Compute Cloud (EC2) instances, one in the US East (N. Virginia) Region and one in the Europe (Paris) Region. I connect using SSH and use cURL to get an object from the CloudFront distribution. Previously, I have uploaded two objects to the S3 bucket that is used as the origin for the distribution: one, for customers based in France, using the fr/ prefix, and one, for customers not in a supported country, using the en/ prefix.

In the EC2 instance in the US East (N. Virginia) Region, I run this command to download the object:

Then I run the same command in the Europe (Paris) Region:

As expected, I am getting different results from the same URL. I am using the -L option so that cURL is following the redirect it receives. In this way, each command is executing two HTTP requests: the first request receives the HTTP redirect from the CloudFront function, the second request follows the redirect and is not modified by the function because it contains a custom path in the URL (/en/ or /fr/).

To see the actual location of the redirect and all HTTP response headers, I use cURL with the -i option. These are the response headers for the EC2 instance running in the US; the function is executed at an edge location in Virginia:

And these are the response headers for the EC2 instance running in France; this time, the function is executed in an edge location near Paris:

Start using CloudFront Functions today to add custom logic at the edge for your applications.